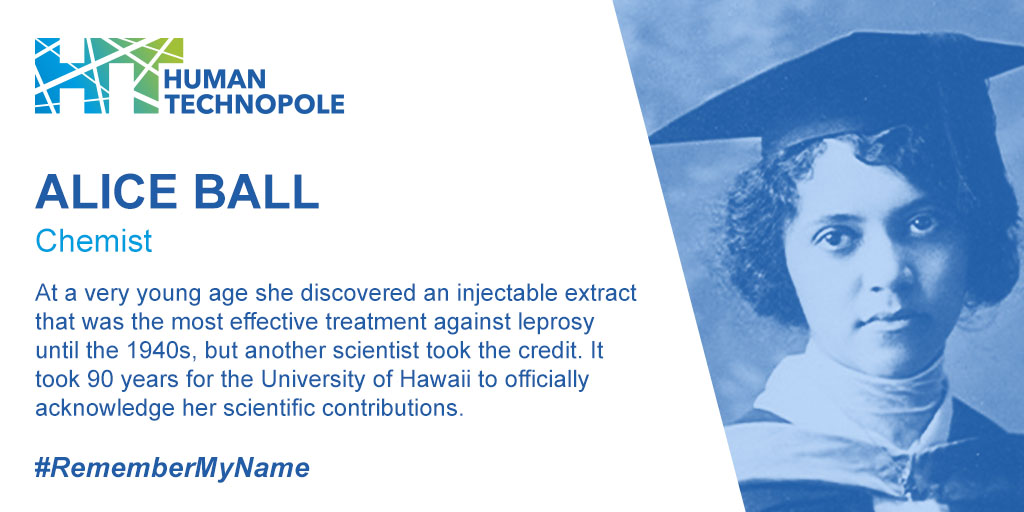 Alice Ball was a chemist who very early in her career pioneered a treatment for Hansen’s Disease, known also as leprosy, which became known as the ‘Ball Method.’ It was the only working treatment until antibiotics were invented.

Alice Ball left Seattle High School after receiving the top grades in the sciences, and went on to study pharmaceutical chemistry at the University of Washington. After graduating, Ball was offered many scholarships including an offer from the University of Hawaii, where she became both the first woman and the first African-American to earn a master’s degree in chemistry from the College of Hawaii.

During her time studying in Hawaii she worked on chaulmoogra oil and its chemical properties. At the time, this type of oil was the only treatment for Hansen’s Disease available but it was almost impossible to use effectively. Through her work, Ball found a way to create a water-soluble solution of the oil’s active compounds that could be safely injected, with minimal side effects.

Sadly, Alice Ball did not get the chance to publish her work as she died shortly after her discovery in 1916 at the age of 24. At such a young age she made a huge difference to thousands of people’s lives as her work led to the development of a new and effective treatment for the disease.