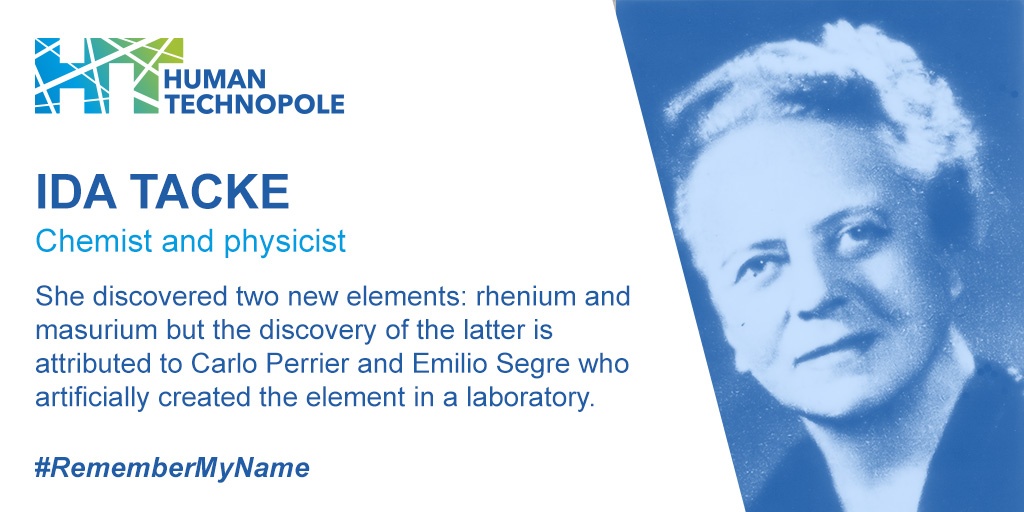 Tacke received a bachelor’s and a doctoral degree from the Technical University in Berlin in 1919 and 1921, respectively. In 1925 she became a researcher at the Physico-Technical Research Agency in Berlin, where she began collaborating with chemists Walter Noddack and Otto Carl Berg.

When Russian chemist Dmitry Mendeleyev proposed the periodic table of the chemical elements in 1871, he left gaps in places where he believed unknown elements would find their place. Two such gaps were below manganese at atomic numbers 43 and 75. Tacke, Noddack, and Berg set out to discover these two elements, and in 1925 they bombarded platinum and columbite ores with electrons, which collided with atomic nuclei that then emitted X-rays. The atomic number of an element could thus be deduced from the spectrum of X-rays that the nuclei emitted. They announced the detection of the two predicted elements: atomic number 43, which they called masurium, after the region in Prussia that Noddack had come from, and atomic number 75, which they called rhenium, after the Latin name for the Rhine River.

Walter Noddack and Tacke married in 1926. Rhenium had been confirmed in 1925 shortly after its discovery, and by 1928 the Noddacks had been able to extract 1 gram (0.04 ounce) of rhenium from more than 600 kg (1,300 pounds) of molybdenite. However, masurium was more controversial because they were unable to extract it. Despite dismissal of their results by the scientific community, the Noddacks stood by their claims about masurium. It was not until 1937 that Italian mineralogist Carlo Perrier and Italian-born American physicist Emilio Segrè produced atomic number 43 (technetium) in a cyclotron. Since a particle accelerator was required to produce technetium, it was considered unlikely that the Noddacks had actually discovered the element.

In 1934 Italian physicist Enrico Fermi claimed possible production of atomic elements heavier than uranium (or transuranium elements) after bombardment of uranium with neutrons. However, in a paper on Fermi’s discovery, Noddack noted in passing that the bombardment of uranium could have actually produced smaller nuclei. Her suggestion was the first proposal of the concept of nuclear fission. However, it was ignored at the time because it entailed such a broad departure from the accepted views of nuclear physics and was unsupported by clear chemical evidence. In 1938 German chemists Otto Hahn and Fritz Strassmann showed that the uranium had indeed split apart into lighter elements and that fission was possible. In 1939 Noddack asserted her prior discovery of nuclear fission. Hahn and Strassmann refused to answer Noddack’s charges. However, by this time, the Noddacks were seen as scientifically suspect because of masurium, and Noddack’s claim was ignored.

Noddack followed Walter to the University of Freiburg in 1935, where she was appointed as a research associate. For the remainder of her career, Noddack took the position of researcher at universities where Walter was appointed as a professor. In 1942 the Noddacks moved to the University of Strasbourg in Nazi-occupied France. When Strasbourg returned to French control in 1944, the Noddacks returned to Germany. After the end of World War II, they spent several years in Turkey. In 1956 they returned to Germany to work for the State Research Institute for Geochemistry in Bamberg. Noddack retired in 1968.