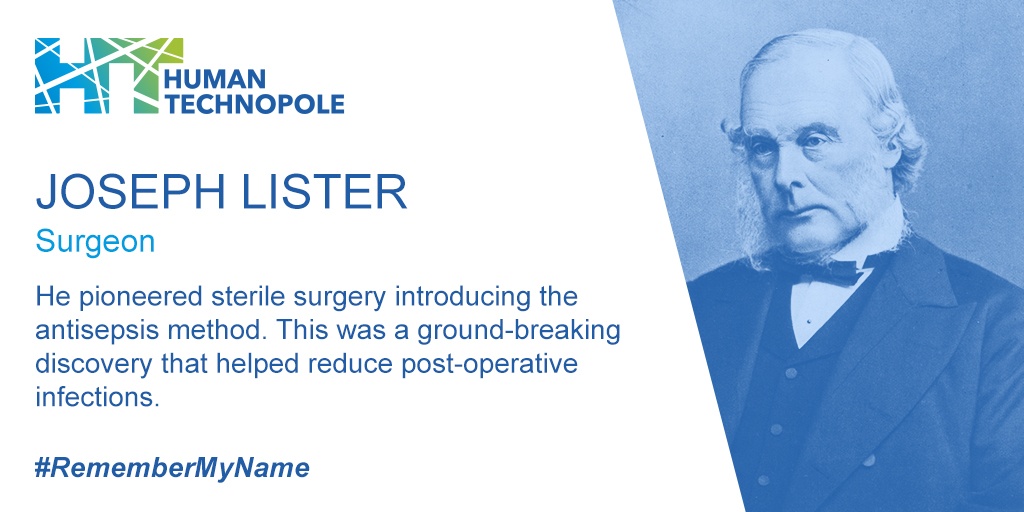 Joseph Lister was British surgeon and medical scientist who was the founder of antiseptic medicine and a pioneer in preventive medicine. While his method, based on the use of antiseptics, is no longer employed, his principle—that bacteria must never gain entry to an operation wound—remains the basis of surgery to this day. He was made a baronet in 1883 and raised to the peerage in 1897.

Lister was the second son of Joseph Jackson Lister and his wife, Isabella Harris, members of the Society of Friends, or Quakers. J.J. Lister, a wine merchant and an amateur physicist and microscopist, was elected a fellow of the Royal Society for his discovery that led to the modern achromatic (non-colour-distorting) microscope.

While both parents took an active part in Lister’s education, his father instructing him in natural history and the use of the microscope, Lister received his formal schooling in two Quaker institutions, which laid far more emphasis upon natural history and science than did other schools. He became interested in comparative anatomy, and, before his 16th birthday, he had decided upon a surgical career.

After taking an arts course at University College, London, he enrolled in the faculty of medical science in October 1848. A brilliant student, he was graduated a bachelor of medicine with honours in 1852; in the same year he became a fellow of the Royal College of Surgeons and house surgeon at University College Hospital. A visit to Edinburgh in the fall of 1853 led to Lister’s appointment as assistant to James Syme, the greatest surgical teacher of his day, and in October 1856 he was appointed surgeon to the Edinburgh Royal Infirmary. In April he had married Syme’s eldest daughter. Lister, a deeply religious man, joined the Scottish Episcopal Church. The marriage, although childless, was a happy one, his wife entering fully into Lister’s professional life.When three years later the Regius Professorship of Surgery at Glasgow University fell vacant, Lister was elected from seven applicants. In August 1861 he was appointed surgeon to the Glasgow Royal Infirmary, where he was in charge of wards in the new surgical block. The managers hoped that hospital disease (now known as operative sepsis—infection of the blood by disease-producing microorganisms) would be greatly decreased in their new building. The hope proved vain, however. Lister reported that, in his Male Accident Ward, between 45 and 50 percent of his amputation cases died from sepsis between 1861 and 1865.

In this ward Lister began his experiments with antisepsis. Much of his earlier published work had dealt with the mechanism of coagulation of the blood and role of the blood vessels in the first stages of inflammation. Both researches depended upon the microscope and were directly connected with the healing of wounds. Lister had already tried out methods to encourage clean healing and had formed theories to account for the prevalence of sepsis. Discarding the popular concept of miasma—direct infection by bad air—he postulated that sepsis might be caused by a pollen-like dust. There is no evidence that he believed this dust to be living matter, but he had come close to the truth. It is therefore all the more surprising that he became acquainted with the work of the bacteriologist Louis Pasteur only in 1865.

Pasteur had arrived at his theory that microorganisms cause fermentation and disease by experiments on fermentation and putrefaction. Lister’s education and his familiarity with the microscope, the process of fermentation, and the natural phenomena of inflammation and coagulation of the blood impelled him to accept Pasteur’s theory as the full revelation of a half-suspected truth. At the start he believed the germs were carried solely by the air. This incorrect opinion proved useful, for it obliged him to adopt the only feasible method of surgically clean treatment. In his attempt to interpose an antiseptic barrier between the wound and the air, he protected the site of operation from infection by the surgeon’s hands and instruments. He found an effective antiseptic in carbolic acid, which had already been used as a means of cleansing foul-smelling sewers and had been empirically advised as a wound dressing in 1863. Lister first successfully used his new method on Aug. 12, 1865; in March 1867 he published a series of cases. The results were dramatic. Between 1865 and 1869, surgical mortality fell from 45 to 15 percent in his Male Accident Ward.

In 1869, Lister succeeded Syme in the chair of Clinical Surgery at Edinburgh. There followed the seven happiest years of his life when, largely as the result of German experiments with antisepsis during the Franco-German War, his clinics were crowded with visitors and eager students. In 1875 Lister made a triumphal tour of the leading surgical centres in Germany. The next year he visited America but was received with little enthusiasm except in Boston and New York City.

Lister’s work had been largely misunderstood in England and the United States. Opposition was directed against his germ theory rather than against his “carbolic treatment.” The majority of practicing surgeons were unconvinced; while not antagonistic, they awaited clear proof that antisepsis constituted a major advance. Lister was not a spectacular operative surgeon and refused to publish statistics. Edinburgh, despite the ancient fame of its medical school, was regarded as a provincial centre. Lister understood that he must convince London before the usefulness of his work would be generally accepted.

His chance came in 1877, when he was offered the chair of Clinical Surgery at King’s College. On Oct. 26, 1877, Lister, at King’s College Hospital, for the first time performed the then-revolutionary operation of wiring a fractured patella, or kneecap. It entailed the deliberate conversion of a simple fracture, carrying no risk to life, into a compound fracture, which often resulted in generalized infection and death. Lister’s proposal was widely publicized and aroused much opposition. Thus, the entire success of his operation carried out under antiseptic conditions forced surgical opinion throughout the world to accept that his method had added greatly to the safety of operative surgery.

More fortunate than many pioneers, Lister saw the almost universal acceptance of his principle during his working life. He retired from surgical practice in 1893, after the death of his wife in the previous year. Many honours came to him. Created a baronet in 1883, he was made Baron Lister of Lyme Regis in 1897 and appointed one of the 12 original members of the Order of Merit in 1902. He was a gentle, shy, unassuming man, firm in his purpose because he humbly believed himself to be directed by God. He was uninterested in social success or financial reward. In person he was handsome, with a fine athletic figure, fresh complexion, hazel eyes, and silver hair. For some years before his death, however, he was almost completely blind and deaf. Lister wrote no books but contributed many papers to professional journals. These are contained in The Collected Papers of Joseph, Baron Lister, 2 vol. (1909).