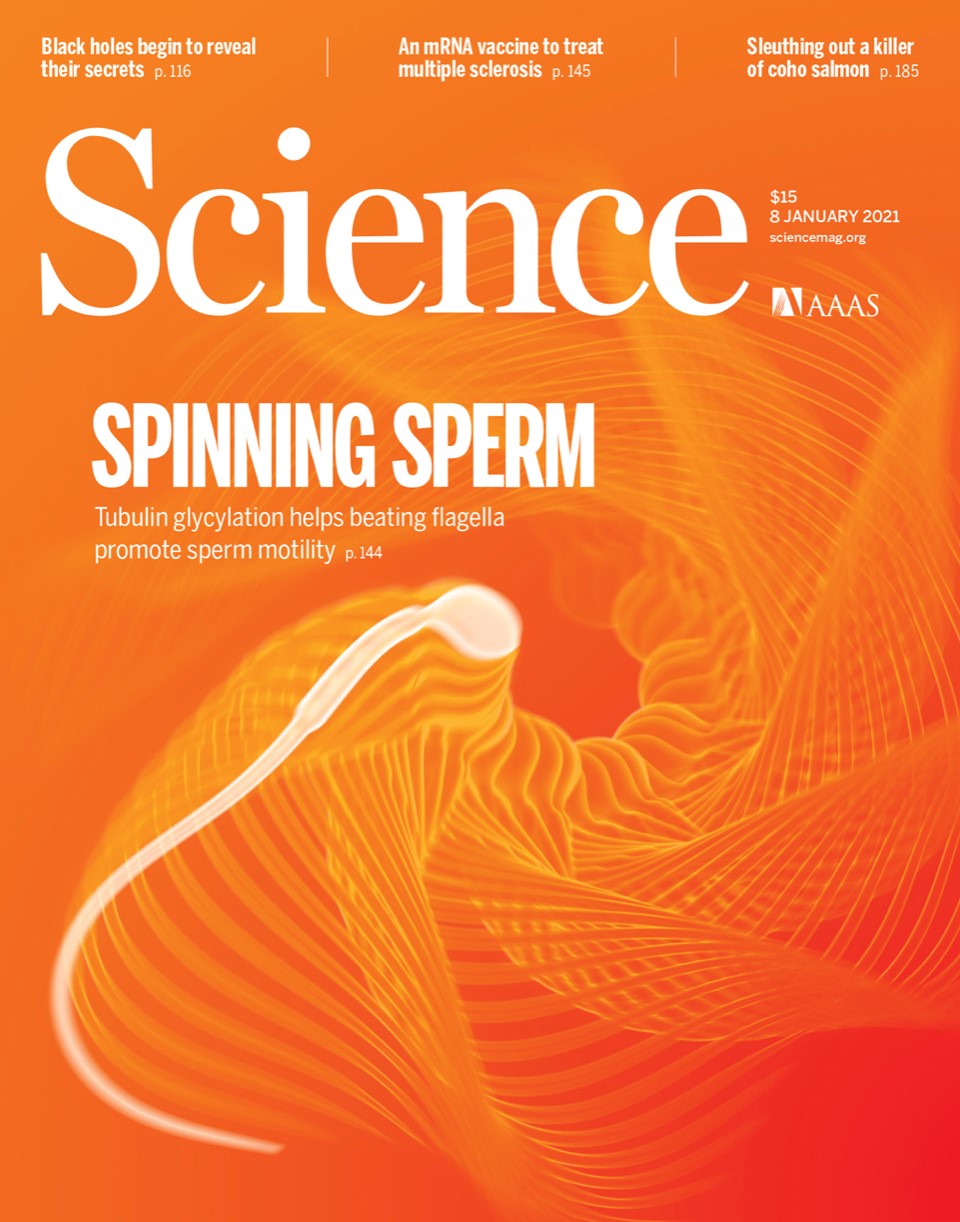 One essential component of each eukaryotic cell is the cytoskeleton. Microtubules, tiny tubes consisting of a protein called tubulin, are part of this skeleton of cells. Cilia and flagella, which are antenna-like structures that protrude from most of the cells in our body, contain many microtubules. An example of flagell is the sperm tail, which is essential for male fertility and thus for sexual reproduction. The flagellum has to beat in a very precise and coordinated manner to allow progressive swimming of the sperm. Failure to do so can lead to male infertility. Researchers at the Institut Curie in Paris, the Max Planck Institute of Molecular Cell Biology and Genetics (MPI-CBG) in Dresden, the research center caesar in Bonn together with the University of Bonn, the Institut Cochin in Paris and the Human Technopole in Milan now show that one particular enzymatic modification of the protein tubulin, called glycylation, is essential to keep sperm swimming in a straight line. These findings imply that a perturbation of this modification could underlie some forms of male infertility in humans.

Cells in our body make use of our DNA library to extract blueprints that contain the instructions to build structures and molecular machines called proteins. But the story does not end here: proteins can be modified by other proteins, called enzymes. That such modifications occur has been known for a long time, yet, surprisingly, their function is in many cases unknown. An excellent example of our lack of in-depth knowledge is the role of modifications of tubulin, the protein that forms microtubules. These are long filaments that are used to make scaffolds in cells. While microtubules are highly similar in all cells of our organism, they fulfil a wide variety of functions. One of the most specialized functions of microtubules is found in the sperm tail or flagellum. Sperm flagella are essential for male fertility and thus for sexual reproduction. They have to beat in a very precise and coordinated manner to allow progressive swimming of the spermatozoids, and failure to do so can lead to male infertility. To keep sperm swimming in a straight line, the modification of the protein tubulin by enzymes is essential. One modification is called glycylation, and was so far among the least-explored modifications of tubulin.

Scientists at the Institut Curie in Paris, the Max Planck Institute of Molecular Cell Biology and Genetics (MPI-CBG) in Dresden and the center of advanced european studies and research (caesar) in Bonn together with the University of Bonn, the Institut Cochin in Paris, and the Human Technopole in Milan took a closer look at glycylation. They found that in the absence of this tubulin modification, the way the flagella beat is perturbed, resulting in sperm that mostly swim in circles. The first author of the study, Sudarshan Gadadhar from the Institut Curie explains: “The core of the sperm flagellum is composed of microtubules, along with tens of thousands of tiny molecular motors, called dyneins, that make it possible to rhythmically bend these microtubules to produce waves for movement and steering. The activity of these dynein motor proteins must be tightly coordinated. In the absence of glycylation, they became uncoordinated, and as a result, we suddenly saw sperm swimming in circles.”

To find this out, the authors of the study had created a mouse line that lacks the genetic blueprints for the enzymes that glycylate microtubules. “We observed functional defects on sperm from mice lacking glycylation, which resulted in a reduction of fertility. Since mice as a model system are known to have robust fertility, a similar defect in humans, could lead to male sterility” says Carsten Janke, CNRS (French National Centre for Scientific Research) researcher at the Institut Curie and one of the coordinators of the study.To find out why lack of glycylation led to perturbed sperm motility and male subfertility, the team used cryo-electron microscopy to visualize the molecular structure of the flagellum and of its molecular motors. Analysis of the mutant sperm flagella revealed that flagella were correctly built, but the mutation interfered with the coordinated activity of the axonemal dyneins – the motors that power the beating of the flagellum. This explains why the swimming of the sperm cells is perturbed.

Why is this discovery so important? The other coordinating authors, Gaia Pigino from MPI-CBG and the Human Technopole, and Luis Alvarez from the research center caesar, summarize: “This study, which shows how important glycylation is for the control of the dynein motors of the flagellum, is a prime example of how microtubule modifications directly affects the function of other proteins in cells. Our findings provide direct evidence that microtubules have an active role in regulating fundamental biological processes via a code of tubulin modifications. Further, this study points to a new mechanism underlying male infertility. Since sperm flagella are one of many types of cilia in our bodies, we expect similar tubulin modifications to be important in various cilia-related functions. Hence, our work opens a door to a deeper understanding of multiple diseases, such as developmental disorders, cancer, kidney diseases, or respiratory and vision disorders.”

†All authors contributed in equal measure to the study