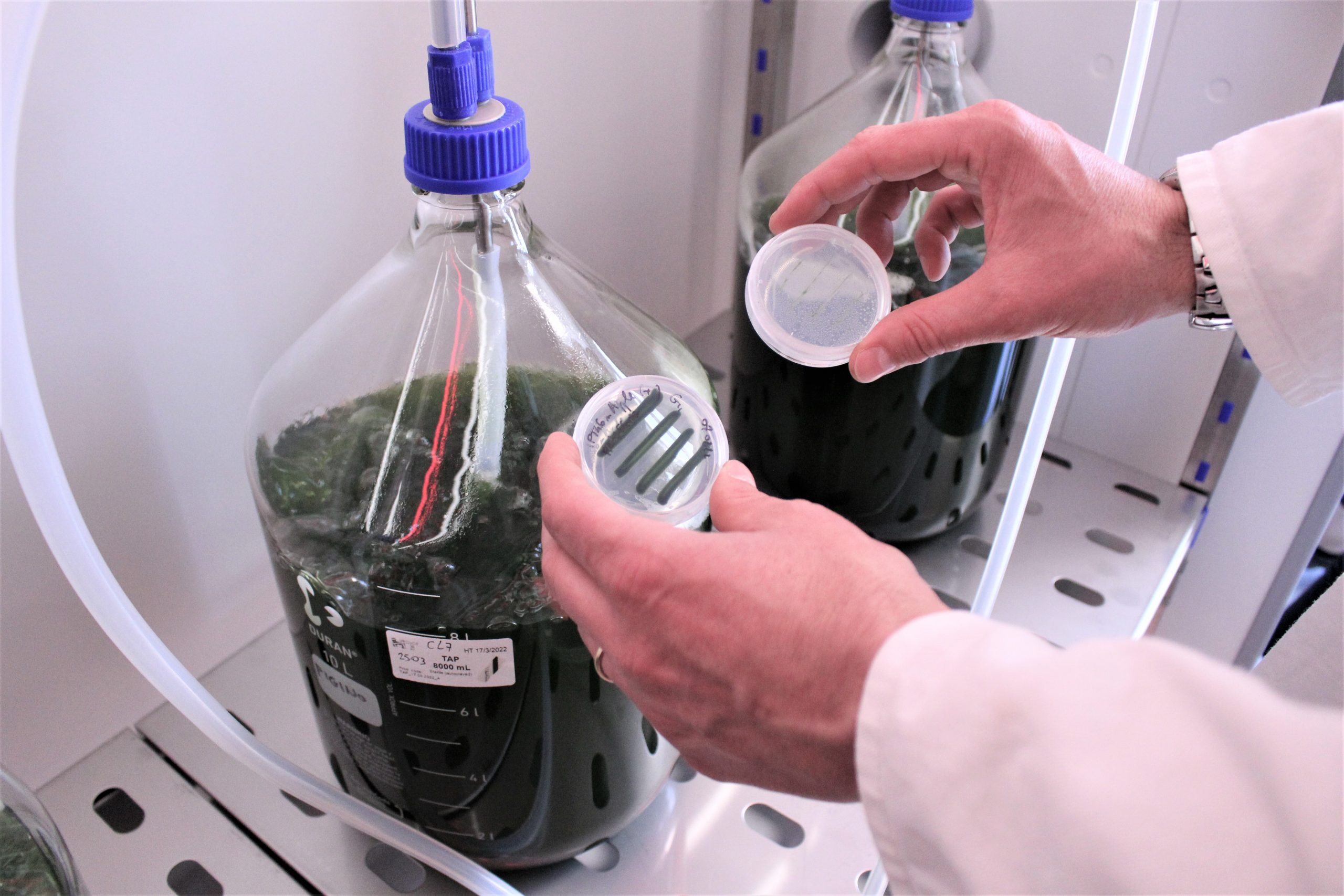 The green solution that bubbles in the Chlamy farm, within the “Chlamy” room on the ground floor of Incubator 1 on the Human Technopole campus, is a mixture of water, salts and algae. It is part of a 60+ litre culture of Chlamydomonas reinhardtii (later referred as Chlamy), a species of algae that is used to study the biology of cilia, organelles which extends from the surface of eukaryotic cells and that are of fundamental importance to human health. Cilia are present in many organs and tissues and cilia misfunctions cause diseases called ciliopathies that can affect kidney, liver, brain, heart, retina, pancreas, and the reproductive and respiratory systems.

The study of cilia and of ciliary and disfunctions in human pathology is the main focus of the Pigino Group in the Structural Biology Centre at Human Technopole, where scientists investigate the structure, the molecular mechanisms of this organelle. Cilia can have both sensory and motile functions, which  are fundamental from the very early stages of embryo development when they coordinate the typical left/right asymmetry of the vertebrate body. Later, cilia allow the correct development and function of specific tissues and organs. Eventually, sensory cilia allow us to sense the environment that surrounds us: we see thanks to the connecting cilium of photoreceptors in our retina, we smell through the sensory cilia at the tip of our olfactory neurons, and we hear thanks to the kinocilium of our sensory hair cells. Motile cilia, which also have sensory functions, work as propeller-like extensions that allow us to breath, by keeping our lungs clean, to reproduce, by propelling sperm cells, and even to think, because they contribute to the flow of cerebrospinal fluid in our brain ventricles.

Because both structure and function of cilia are conserved from algae to humans, the Pigino Group uses Chlamy as a model organism because they can grow large quantities of Chlamy in a cost-effective manner. They can also modify its genome to create strains suited for their experiments. For example, they can add small tags to Chlamy proteins to fish them out of the cell or small fluorescent probes to follow them under the microscope.

Now, back to the green bubbling solution that you see in the Chlamy farm. The culture is a process that lasts around two weeks and ends with the isolation of one protein complex that is part of the IFT (Intra-Flagellar Transport)-trains, molecular machineries that are essential for cilia biogenesis. IFT-trains, similarly to real trains, move upward and downward the cilia running on microtubules which are the railway-tracks of the cilium. The IFT-trains carry the building blocks of the cilium from the base upward to the tip of the cilium and then they go back to the base to reload and restart another trip. IFT-trains carry also signaling molecules that are released from the tip of the cilium and deliver messages to the surrounding cells. Numerous ciliopathies are caused by mutations of IFT genes, however, we still do not know how the IFT-trains are formed and function at the molecular level. What does this mean? If we continue with the example of the train, we want to know where each single screw and gear of the train is located and how they work together to ensure that the train moves. Moreover, we want to know how trains are loaded and unloaded and how the transit of trains going upward or downward the tracks is regulated. We use the electron microscopes that are running in the HT Cryo-EM facility to address these questions.

To run these experiments, the Pigino Group needs to grow Chlamydomonas in a controlled environment that we call “Chlamy farm”. The one at Human Technopole is one of a kind: installed in March 2021, it was the first instrument registered in the HT inventory, and it is unique because it is custom-made for our labs. Among the key features of the farm are a software to control light, temperature and other environmental conditions and a customised parallelised system of the pipes and taps that pump compressed air into bottles to keep the solution well aerated while the algae divide.

Setting the farm up was not an easy task, particularly when it came to figuring out how to maintain a high enough pressure to allow the growth of algae. The project was jointly designed by the Pigino Group and colleagues from Campus Development and Facility Management, Strategy and Scientific Affairs and Procurement teams who dealt with several difficulties and, for several months, faced the risk of having to significantly downsize the project.

In the end, thanks to excellent teamwork and creative thinking, the Chlamy farm was set up according to the original plan and, in early January 2022, the first large scale cell culture was produced on site.

A miracle, some might say. “Rather a very successful collaboration between persistent and motivated experts who are willing to think outside the box and go the extra mile” underlined Fabrizio Martino, Staff Scientist of the Pigino Group.

Special thanks to the project team: